Click and Connect: SEiSMiC Society Shifts That Are Changing the Way We Live and Work

The Millennium has seen seismic shifts in society that are changing the way we live and work. Citizens and communities are joining together to create a climate for change. Their focus is on working together and influencing governments to improve lives. Alongside this we are also seeing what has been referred to as a “health epidemic”, pressures caused by demographic changes, and a range of equality issues.

Connected citizens and communities creating the climate for change

Jessica Leber, author of Co-Exist World Changing Idea, wrote that “Peaceful Protests – slow and steady are winning the race to create change”. When discussing “peaceful protests” the discussion immediately moves to media news of ordinary people taking to the streets to correct an injustice. The internet and mobile phones have further expanded the societal revolution by creating social voices – just a “click to connect with individuals worldwide”. Connected citizens and communities are making their voices heard through a host of social media such as Twitter, WhatsApp and Instagram. These connected communities have become the drivers for global societal change. “The power of one, if fearless and focused is formidable, but the power of many working together is better.” (Gloria Macapagel Arroyo).

When governments or public bodies are not listening or addressing societal problems people are doing it for themselves. An inspirational story of a community working together can be found in the city of Detroit, which was crumbling following the collapse of the car industry. Amy Kaherl founded Detroit Soup, saying “we don’t have to wait to ask for permission – we can do this for ourselves”.

Based on the crowd-funding concept, members of Detroit Soup a) cook soup together as a bonding experience and b) generate income by charging $5 per person for the soup . Members of the community come along and are pitched business ideas by other members of the community. After the soup has been eaten a vote is held to decide which business idea will be funded. SOUP’s micro grants have created a network of social enterprises, building skills and social value which have helped to regenerate the city. Homeless and unemployed people have got jobs, homes, new skills and, as important, self-worth.

The collapse of the banking system created a culture of distrust across the world about banking sector ethics due to huge bonuses for banking staff whilst loan facilities were tightened, forcing those who can least afford high interest rates to seek credit from unscrupulous sources. To help mitigate this, charities and communities have started to offer their own “payday loans” at an interest rate that stops individuals spiralling into debt. The societal shift of “people over banks” is continuing without abatement in sight.

The Social Value Act (2012) was a response to a growing societal voice that public money generated through taxation of citizens should be used to improve local communities by procuring services/products through local enterprises. “Public money generating community growth and economic worth”. However the top down rather than bottom up “SOUP” approach to regenerating communities has yet to realise its ambition.

With modern global communication there is no escaping powerful imagery of injustices and human suffering. The “consciousness” of ordinary people has been stirred. People now care about where goods are sourced and the human cost of low cost items. They care if supermarkets have been lax about the origin of products – and vote with their feet. They care if humans are traficked for money or forced into bonded labour. The Modern Slavery Act (2015) is a result of deep seated concern that human beings are being used as commodities. Businesses are now expected to start to ensure the supply chain that brings products to market is free from modern slavery. Society has shifted and a new era of caring has emerged with people thinking that “it’s about us as a society”.

America’s focus on income equality was highlighted when President Obama called the growing inequality in society “the deining challenge of our time”. In Britain, Channel 4 highlighted that 20% of employees in Britain were paid below the rate deemed necessary for a basic standard of living. The boss of Next, who earns £4 million a year and pays shop workers £6.70 an hour, sparked a row by declaring the “living wage “irrelevant” with no basis in reality”. This is just one example of those who have not supported the concept of the living wage. However, in a move to improve wages in 2015 the British government increased the minimum wage by 3% to £6.70 per hour. The TUC responded by saying that the increase will not be enough to end in-work poverty.

The consequences of not addressing the growing number of hard working people who live in poverty are large – including increasing burdens on social services and decreasing motivation for people to ind work. Income inequality needs to be addressed. Maintaining social cohesion and equality is a global issue that will require a collective political and societal approach.

Along with equality of income sits the thorny issue of maintaining population growth. Across the developed world the birth rate is declining. For example, in Italy the birth rate has dropped to 1.6 and the US has also plummeted to a record low 1.86. In Britain there was a bit of a baby boom between 2001- 2012 when live births rose to 1.94 in 2012 but decreased in 2013 to 1.85 births.

In the UK there is no single explanation for the mini baby boom. Possible causes may include more women currently in their twenties having children and an increase in foreign born women who have a higher fertility rate. Government policy and economic climate may also indirectly influence decisions around childbearing, such as increasing maternity and paternity leave and tax credits.

There is also concern that demographic trends predict an ageing society where there are more people not working than working. Ten million people in the UK are over 65 years old and the latest projections are that this number will nearly double to around 19 million by 2050.

An inverted population demographic with more elderly people than live births creates huge economic and societal pressures. The health and wellbeing of the population along with an older population that contributes rather than draws on the economic wealth will be the “real deal” for governments and society. It is easy to predict that there will be a continuing rise of pension age, indeed retirement as we know it may well not exist. For employers balancing four generations in the workplace with different values and work abilities will be the challenge that extends far beyond the issues of living wage pay.

Brigitte Piniewski, MD, Chief Medical Oficer at Peace Laboratories commented “we are no longer accidentally well”. In a few decades we will lose the last of the generation of accidentally well which was the “baby boomer” generation who acquired a level of health, itness and cognitive performance they did not set out to earn. High calorie food was not invented, children played outdoors, and walked to school. What was a genetically stable population has, within four decades, moved to 67% of the population being overweight and obese, with secondary adverse health conditions, more cardiovascular disease and one or more chronic diseases. In the US 75% of healthcare spend is on chronic care management. Research is indicating that 70- 85% of health conditions are lifestyle mediated.

Research by the World Health Organisation indicates that the global rise in obesity (and associated conditions) is due entirely to a drop in activity and a switch from farm to factory foods (diet). This is consistent regardless of population or country. 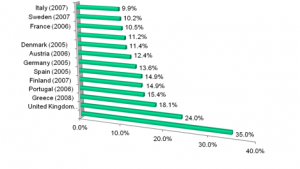 Globally there are profound social implications regarding the evolving epidemic of T2 diabetes in children and young people. This raises concerns about the future for a whole generation who are managing diabetes through medication and lifestyle. What is the impact of poor diet and nutrition on the cognitive ability of a whole generation of young people? How will that in turn impact on the “knowledge” industry job market of developed countries and consequently economic growth? 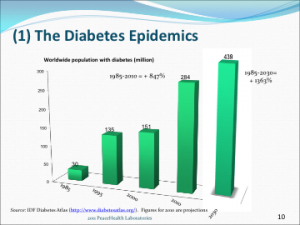 In summary the emergent explosion in chronic diseases has arisen as a result of:

If population health is to be improved there is a need for a societal shift towards health self-management. Piniewski comments that “citizens can no longer be passive recipients of healthcare but co-creators of their own health and wellbeing”.

Today a lifestyle with little activity coupled with signiicantly reined carbohydrate loads wreaks havoc with nervous and immune systems. Lifestyle modiiers including activity and diet would deliver a reduction of 60% of some cancers and 83% less heart disease. Emotional wellbeing is also key to healthy lifestyle – there is a strong link between emotional ill health and chronic conditions, physical pain and emotional dificulty.

The top tips for wellness are:

Making national news on BBC/ITV at the end of March 2015 was a press release from the Public Health Institute. They have been undertaking a research study measuring how negative emotions can harm health and wellbeing, and the effect of peoples’ lifestyle choices such as smoking, diet and alcohol. The good news is “We are all oficially happier”.

There is no doubt that society has shifted and increasingly realises that individuals, communities and countries can make a difference to tomorrow’s world – but is that making us oficially happier? Time will show but society is starting to embrace health, itness and wellness.

Visiting Professor and Board Member of the Institute of Health & Wellbeing, University of Northampton